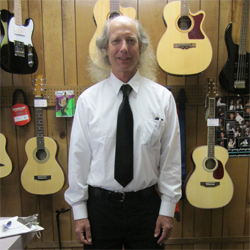 "Music is a Happening Thing" says Dave Gladkowski, who has been teaching at the NJ School of Music since 1984.

"When I was a young musician receiving music lessons at a local Philadelphia music studio named, "Howard Herbert's", my instructor, Mr. Gene Magee, a brilliant musician, guitar player and teacher would show me exactly what I wanted to learn, at just the asking. If I wanted to learn "Blue Suede Shoes", "I Want To Hold Your Hand" or fragments of "Beethoven's Coral Fantasy" we would listen to the 45rpm record, analyze the song form and compositional style and he would show me the chords, sketch the melody and demonstrate how he would play it. That's the way I wanted to be taught and Mr. Magee obliged. I would immediately take this information home, continue listening to the record, countless times, play along with the record, and practice my fingers raw. This is the method of teaching; in Mr. Magee's honor; I've always used and continue to use now, myself, a professional musician and instructor, when directing my music lessons." David Gladkowski

David Gladkowski (Davey Glad, Neversad), guitar, bass, madolin and banjo teacher at the NJ School of Music, is a street and college educated, learned, multi faceted, knowledgeable, free spirited, talented, patient, confidant, competent, composer, arranger, musician and music instructor. Dave has been a guitar, bass, mandolin, and tenor banjo instructor at the New Jersey School of Music since 1984. Dave's father was a professional musician (saxophone) and always made recordings of his musical groups performances. While listening to these recordings, Dave's dad would stress the importance of listening to the different rhythms and melodies of all styles of music. This is how and when Dave developed his love, and passion for music. With Dave's father being his biggest musical influence, Dave began formal music lessons on the piano at age 8. After 6 years of piano lessons, at age 14, Dave decided the instrument he would use to express his inner soul would be the guitar.

Living in Philadelphia, Dave began his formal guitar lessons with local instructor, Gene Magee. Dave continued his studies with James Newitt, William Newman and progressing into college as a classical guitar performance major at Temple University studying with the great Anna Kotsarenko and Peter Segal. Later, Dave studied jazz guitar with Joseph Federico (once an instructor at the NJ School of Music).

At age 16 Dave began his professional performing career with original music, local band, THE MAIN EVENT, performing in Philadelphia area hotspots, including, THE SECOND FRET, at 20th and Samson Streets, a progressive rock ' n ' roll club in the mid to late 1960's. Performing professionally with many different projects since 1967, Dave decided to share his knowledge with interested students in 1976, becoming a professional guitar instructor himself, passing the torch from all of his early teachers. Continuing to gather knowledge, Dave periodically returns to formal music lessons, himself, studying with various styles of instructors and attending workshops.

Expanding his knowledge of the many different styles and approaches to use the guitar as an instrument to express himself, Dave studied Flamenco Guitar in Spain, first in 2001, learning in the streets of Málaga with different bands of gypsies, also in Flamenco Taverns and other guitar players, who strolled the streets of Spain, who were glad to share their proud and unique Andalucían, Flamenco culture. Dave believes that learning from people, casually, happening upon those who have the music deep in their souls, can be described as a spiritual experience. There is nothing else like it!

Dave returned to Spain in 2005, and formally studied Flamenco Guitar with David (el Poeta) Hill in Jerez de la Frontera and again in 2009, in Velez, Málaga, studying with Manuel Bajo and again whoever happened by on the streets or at local taverns. Between the years of 2005 and 2009 Dave studied periodically with Philadelphia based, Spanish Flamenco instructor, Carlos Rubio.

While visiting Spain, Dave fell in love with everything Spanish, Andalucian in particular. It was then he began learning Spanish as his second language. Although not fluent, Dave has an effective, practical understanding to carry a conversation totally in Spanish and continues to enjoy practicing the language.

As a fretted instrument (guitar concentration) instructor, Dave uses a practical method of teaching hoping the student will learn how the guitar can be an instrument useful the same way tools are used by different technicians. A special rhythmic or melodic style applied to a type of music to be played; a special tool for a special job. Dave is willing to adjust his style of instructing to meet the student's needs, not sticking to one methodical, graded, anthology and adapting to changes necessary to guide the student into their personal passion and musical direction.

Listening to the music, followed by a scrutinized analysis, was and is now Dave's principal learning and teaching method. Sight reading, chord chart reading, chord chemistry, melodic and pulse rhythm are studied in detail. Scales, arpeggios and fingerboard knowledge are discussed and are not stressed. Dave believes these details of musicianship are the student's responsibility.

Improvisational skills are an essential element studied in complete detail becoming a collected "tool" allowing the student's music to be: spontaneous, flowing and personal as opposed to: forced, stiff, restrictive and contrived, giving the student confidence to perform in ensemble situations, making something, from what might be to some, nothing.

Dave is the director of the famed "New Jersey School of Music Rock 'n' Roll Ensemble" that has been active since 1985, long before the "School Of Rock" existed or was even imagined. This musically high standard, advanced ensemble's goal is to produce professional quality musicians, instrumentally and vocally, giving students practical knowledge, rehearsing, playing, and gigging with a complete band.

In short, Dave will teach the student whatever they want to learn. In addition, Dave believes that reading a resume to evaluate an instructor's competence is only a start and the only way to truly determine competence is to meet the instructor in person. Dave promises his music lessons are enlightening, illuminating and fun!

Dave makes no claims of knowing everything and will be a student of life and the guitar forever."When one ceases to be a student, one ceases to learn" (David Gladkowski) So If you're interested in learning how to play guitar or other fretted instruments, come to the New Jersey School of Music and request Davey Glad Neversad to be your instructor.

Lessons with Dave are available Monday through Thursday at the NJ School of Music in Medford.